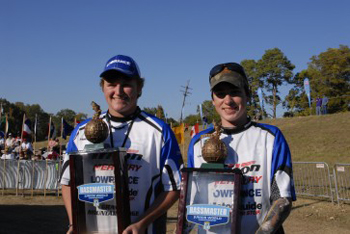 James Graves III, on left, represented, the OCHS Anglers, the Virginia Junior Bass Federation Nation and the Mid Atlantic states – Junior Bass Federation Nation, at the Junior World classic in Monroe, La. and wins big. Graves blew away the field on Bayou DeSiard in Monroe, La., with 5 pounds, 12 ounces, which was 3 pounds, 10 ounces better than his closest opponent in the 11- to 14-year-olds age division. Graves was the only angler in the field to bring in more than two fish, and he credits the cypress trees in the shade against the bank for his good fortune. He was fishing a shaky head slowly around the cypress trees, and the bass would just pick it up.”I was catching them on almost every cast this morning,” said Graves, a member of the Orange County High School Anglers in Virginia. “I caught about 10 today, but only four were keepers.”James has participated with the OCHS Anglers team as an associate member, since his home town of Madison, Va. has had no Junior Bass Federation Nation Program. Becky Gore, the OCHS youth advisor knew young Graves of Wetsel Middle School and now a freshman at Madison County High School. She taught both James’ Mom, Missy and his Dad, Lucky during her tenure at Madison County High prior to teaching at Orange County High School. “I had watched young James fish the trout streams on his Granddad’s (James Sr.) farm resort,and recognized quickly his natural talent.” say Gore, “Also some of the locals, she says, call him “The Fish Whisper”‘.Last year at the OC Fishing and Sportsman Show, Gore spoke with Lucky and James about fishing with the OCHS Angler’s Program. Gore says ” I wanted James to have the chance to fish competitively and also to encourage Lucky to start a similar program in Madison County.” James’ parents would bring him to meet Gore at her home in Madison, and travel with her to the tournaments. “Having the opportunity to talk with him on the way to tournaments, I could see that James was outgoing, not a bit shy and could be quite the competitor.” says Gore. She linked him up with the OCHS Angler, President Devon Bowling, who helped James feel comfortable with this new group of peers. James won his first tournament at Lake Orange, and went on to do well in all of the following chapter tournaments. James then fished his first Junior State Qualifier at Lake Anna in June 2011 and in this tournament James won a spot in the July 2011, Junior State Classic- held on Buggs Island. At the JSC, Graves won his age division and was eligible to advance with the adult Bass Federation Nation- Va. state team to fish the Delaware River in the Mid Atlantic Regional tournament. Again his strong performance in this tournament allowed him to advance to the World Classic. James had only one day of practice on the Bayou DeSiard. Volunteer anglers from University of Louisiana at Monroe (ULM) team were the boat captains for the young competitors. “I would have fished the same stuff James did,” said Nick LaDart, Graves’ driver. “He really adapted today from the cloudy conditions in practice yesterday. He did great.” James will receive a 16 foot, Triton bass boat.Ralph Millsaps
State Youth Director